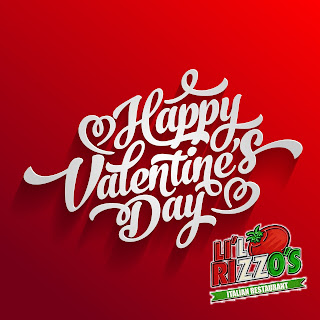 The day of love is celebrated in many parts of the world, and is very significant to the Italian culture. When celebrating Valentine's day in Italy, there are many fun, meaning traditions that people enjoy, and much like in the Untied States, it is all about love and romance. Here are a few fun Italian Valentine's Day traditions that you could incorporate into your celebrations!

Some say that Valentine's Day originated in the Roman Empire as a holiday to celebrate the Queen of Roman gods and goddesses. The Romans also considered the queen named Juno to be the goddess Queen of Women and Marriage.

Another idea is that St. Valentine, who was a priest, defied the Roman emperor's orders. He banned marriage between lovers during wartime, and Valentine secretly continued marrying them. Once it was discovered, Valentine was put to death on February 14th, and late named a saint by Pope Gelasius. 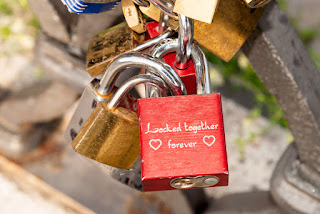 This is a newer tradition that was started after the release of the best=selling book "Ho Voglio Di Te" (I Want You) by the Italian author Federico Moccia. The tradition consists of locking padlocks to bridges, railings, and lamp posts, inscribe your names on it, and then lock it and throw away the key. While this is becoming illegal, and the authorities are removing the locks, they still continue to appear.

Much like in the United States, lovers exchange chocolates and flowers and plan romantic dinners. There is a renowned chocolate maker, Perugina, who celebrates this day by making a special edition of Baci chocolate candies. They normally have a traditional hazelnut center, but during Valentine's day, they are filled with cherries and liquid center. They are wrapped in red foil with a love note inside, and always a favorite. 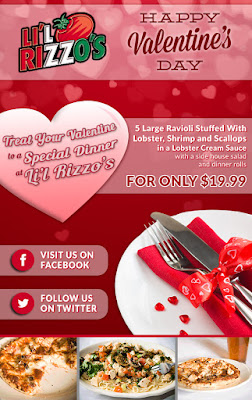 Florence and Venice are usually considered the most romantic places in Italy. Verona runs a close second, though, because that is where Romeo and Juliet fell in love and eventually died in Shakespeare's famous play. Verona has a four-day celebration of events designated  "Verona in love." There will be a giant heart painted in the center of the city, as well as heart shaped lanterns, and free concerts.

It's time to treat your Valentine to a special dinner at  Li'l Rizzo's! We have a romantic restaurant at the Lake of the Ozarks where you can sit down and enjoy each other's company over our delicious seafood ravioli. You can get five large ravioli stuffed with lobster, shrimp, and scallops with an amazing lobster cream sauce with a side house salad and dinner rolls. You can get all of this amazing food for only $19.99!

Come out to Li'l Rizzo's on February 14th for a delicious, and romantic dinner at the Lake of the Ozarks, and celebrate this romantic holiday. Happy Valentine's Day!